Healthcare Hero Q & A with Vanessa! 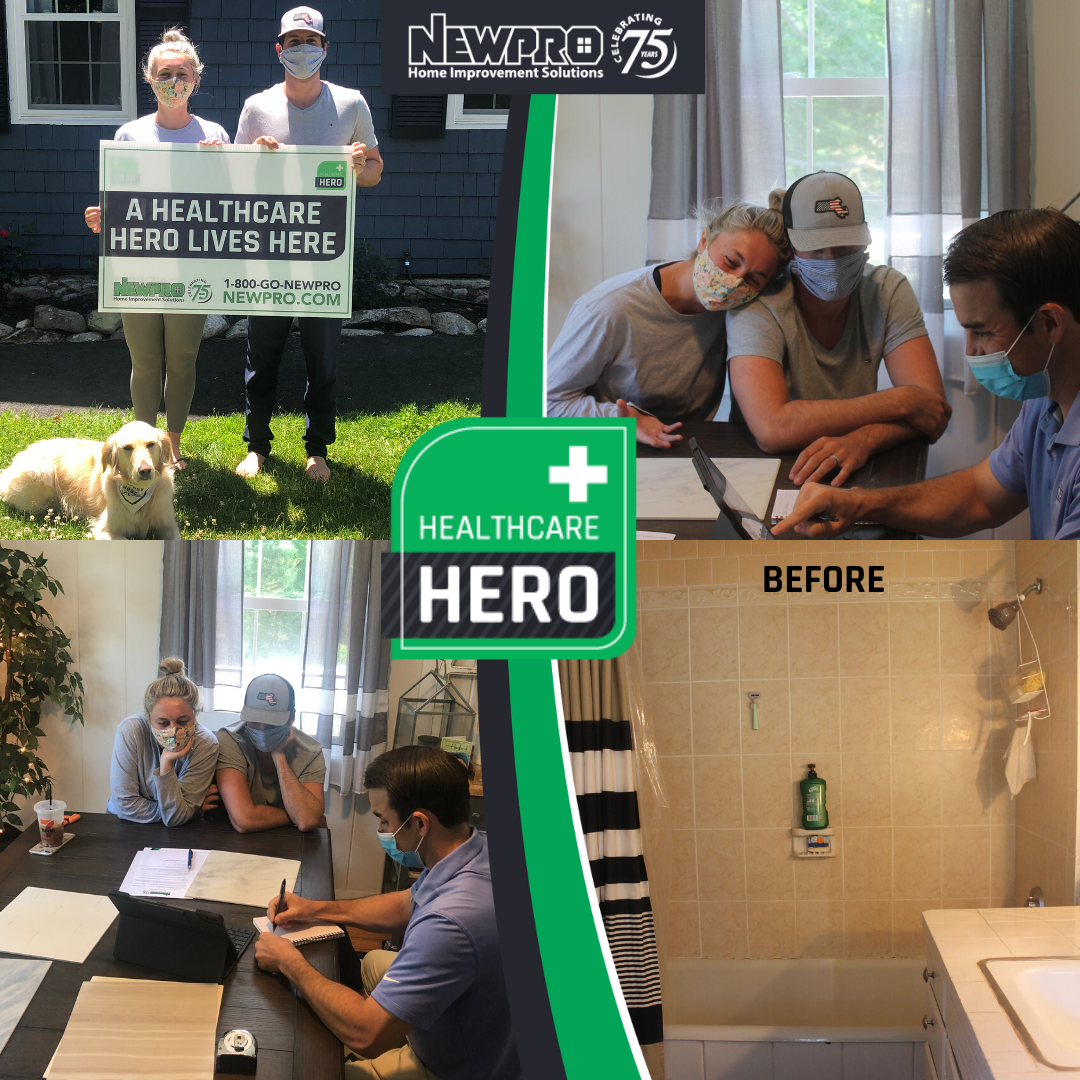 On Monday, June 15th, the NEWPRO team arrived at Vanessa’s home in Norwell, MA. They were instantly greeted by her husband, Jon, and their adorable pup, Bromley. Vanessa had a long week ahead of her at Mass General Hospital and the NEWPRO team assured her that this was going to be the best day off ever. She was about to build the bath of her dreams!

One of our general sales managers, Pete, walked Vanessa & Jon through the presentation to show them all the available options from wall colors to faucets, to accessories. From the moment they made their first selection, it was clear that Vanessa & Jon were so grateful. This was all that they dreamed of…and more!

After designing their dream bath, we sat down with the couple to ask them more about their lives and why Vanessa was nominated by her husband Jon.

Question: What made you nominate Vanessa for our Healthcare Heroes program?

Jon: Vanessa is the most giving person I’ve ever met in my life. She is always doing things for other people. For example, when her sister announced she was getting married, Vanessa basically helped her plan the whole thing. When this COVID crisis first started, it was right around Easter. Vanessa went around to our friends and family, delivering Easter baskets. She also delivered care packages to all of her nursing friends. But the most giving act of them all was being a bone marrow donor. I don’t know how she did it, but she did. She made out like it was no big deal.

Question: What does a typical day look like for you at the hospital?

Vanessa: Well, I start the day off by arriving at the hospital in my scrubs. But then I throw on an N-95 mask, followed by a surgical mask on top of the N-95, and, finally, a shield on top of that. I’m also wearing some sort of shower cap. You get hot and sweaty quickly. After a long day helping patients physically and emotionally, I am drained. When I pull into the driveway, I immediately jump out of my contaminated scrubs and throw them in a plastic bag to wash, and jump into the shower. It can be scary because I don’t know exactly what I am bringing home to my family.

Question: How does it feel to be getting a shower makeover from NEWPRO? How is it going to benefit you?

Vanessa: Initially, when Jon told me about how I had been selected as a Healthcare Hero, I was shocked. He had me on the phone with Marci, the vice president of NEWPRO, and she told me how I just won a shower makeover. As she explained the program to me, I just couldn’t believe it. Me? You got over 1,000 submissions and you chose me? This wasn’t luck…this felt like fate. Jon and I have been talking about different home improvement projects and we’ve always talked about re-doing the bathroom. Now, thanks to NEWPRO, that is one project we get to check off of our bucket list. The best feeling in the world will be jumping out of the shower, feeling cleaner than ever!

*BY SUBMITTING A FORM, I AUTHORIZE NEWPRO OPERATING LLC (NEWPRO) TO CONTACT ME WITH INFORMATION ABOUT ITS PRODUCTS AND SERVICES VIA POSTAL MAIL, EMAIL, PHONE AND/OR TEXT AT THE CONTACT INFORMATION PROVIDED ABOVE, EVEN IF I AM ON THE NATIONAL OR LOCAL DO NOT CALL LIST. NEWPRO MAY USE AUTOMATED TELEPHONE TECHNOLOGY TO INITIATE CALLS TO ITS CUSTOMERS. BY CHECKING THIS BOX AND SUBMITTING THIS FORM, I CONSENT TO RECEIVE CALLS FROM NEWPRO ABOUT ITS PRODUCTS AND SERVICES AT THE PHONE NUMBER PROVIDED ABOVE USING AUTOMATED TELEPHONE TECHNOLOGY. I UNDERSTAND THAT CONSENT IS NOT REQUIRED TO PURCHASE GOODS OR SERVICES FROM NEWPRO.