NEWPRO is excited to introduce our 2020 Baths for the Brave bath crash recipient: Derek Morgan from Hooksett, NH!

Derek served in the Vietnam War for 2 years and was stationed in Duc Pho, Vietnam from 1969 to 1971.   On Veterans Day, Derek received the gift of a new Jacuzzi step-in safety shower system FREE of charge – including all product and labor.

Baths For The Brave Nomination

Upon returning to the US after serving in Vietnam, Derek became a tractor-trailer driver and would continue to deliver goods across America for the next 40 years before retiring. His daughter-in-law, Kara, decided to nominate him for our Baths for the Brave program as she and her husband worry about Derek’s ability to shower safely due to severe circulation problems in his legs and diminishing vision issues.

When he learned that he was selected as our Baths for the Brave recipient, he was extremely humbled by the fact that this was NEWPRO’s way of thanking him for serving his country.  He is extremely humbled to be part of this national event and 1 of 10 veterans across the country to receive this gift of thanks. This new walk-in shower is going to provide not only a fresh, updated look for his bathroom but most importantly a safer bathing space for Derek!  NEWPRO teamed up with 9 other home improvement companies across the county to change the lives of 10 veterans. This year, we decided to bring all of our veterans together on a Zoom call to share their excitement and so we could express our gratitude to all! 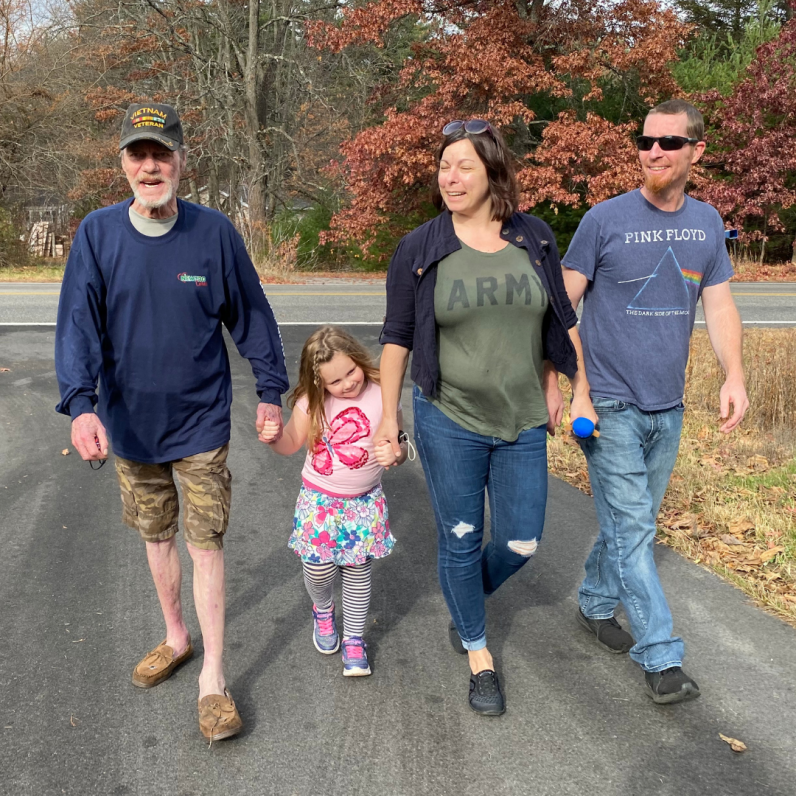 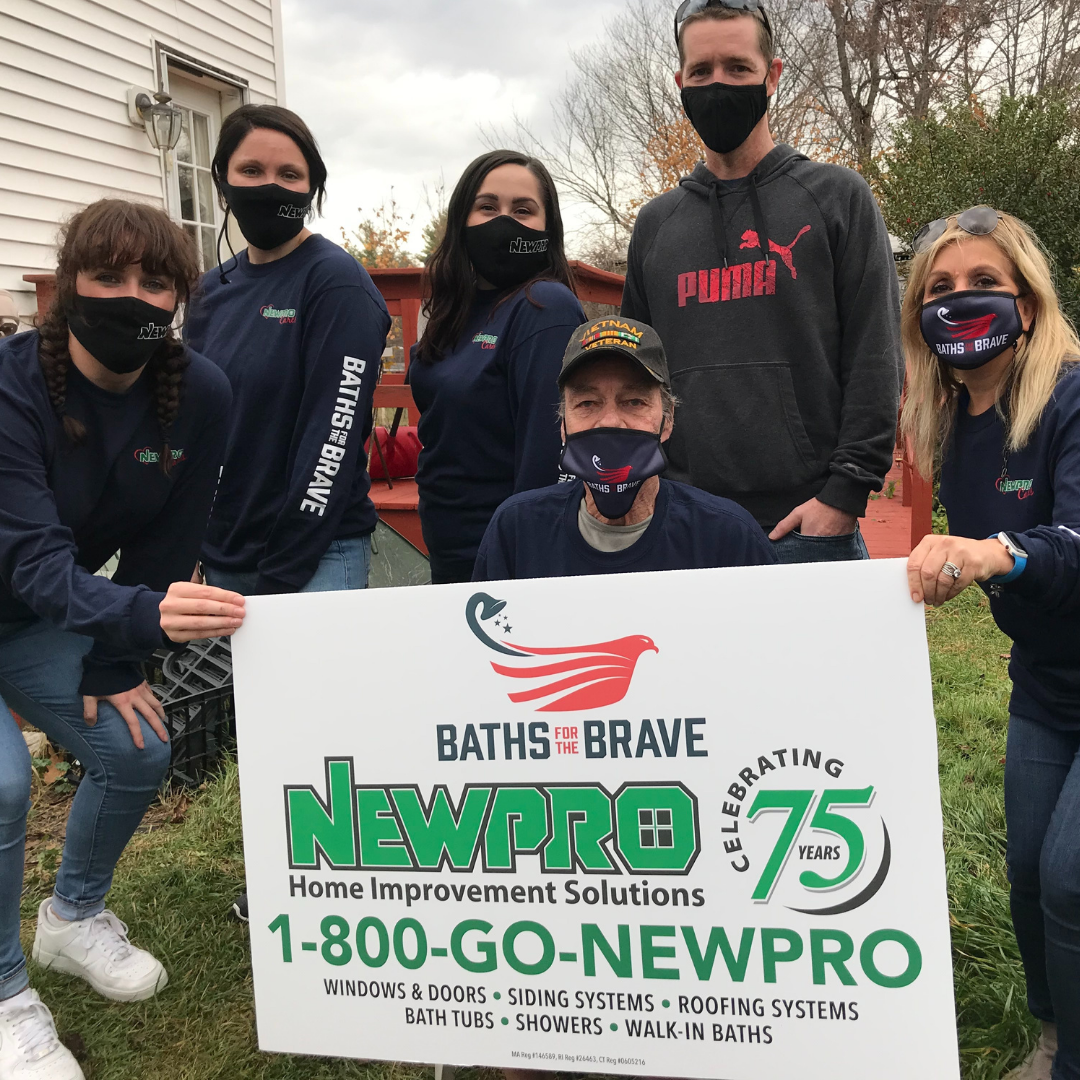 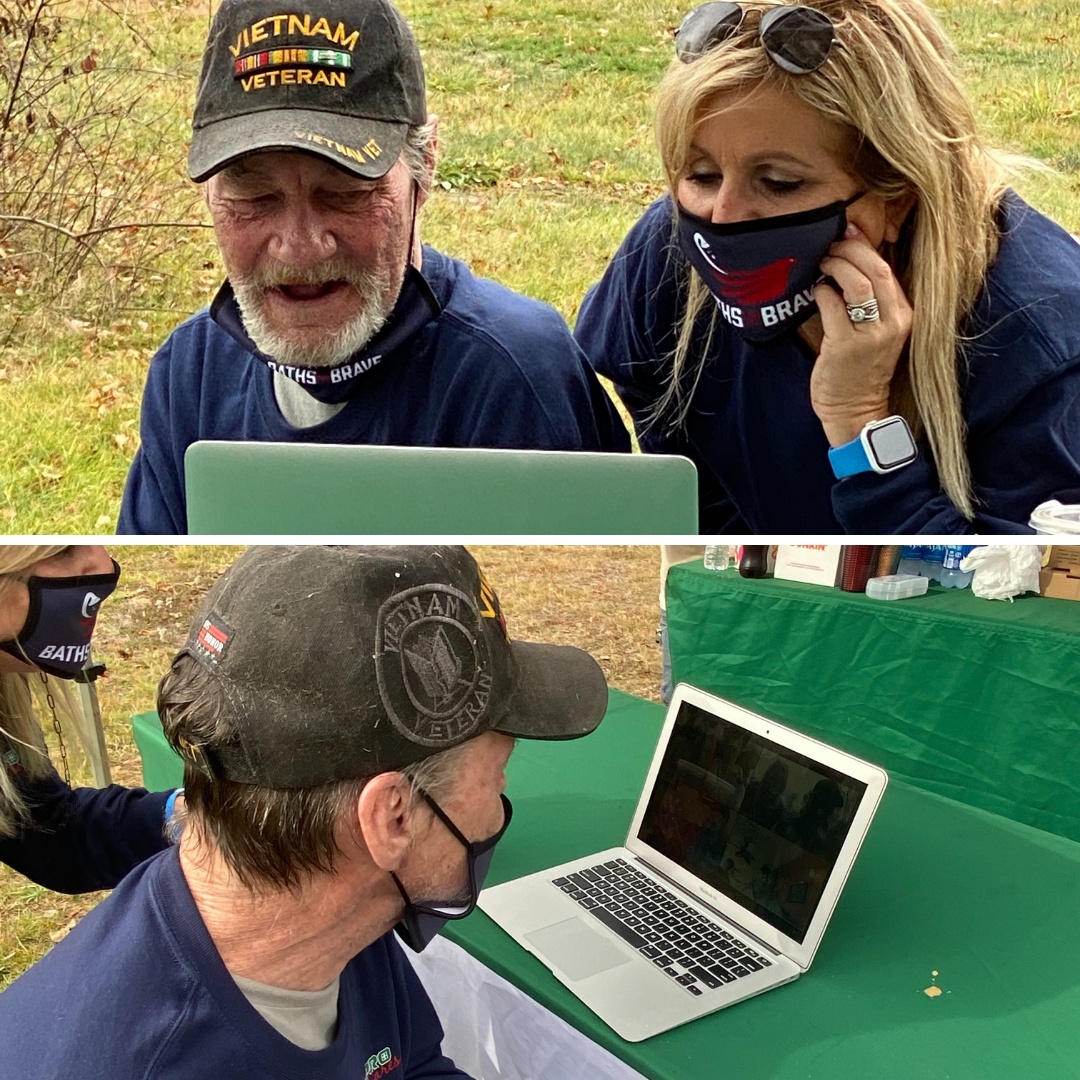 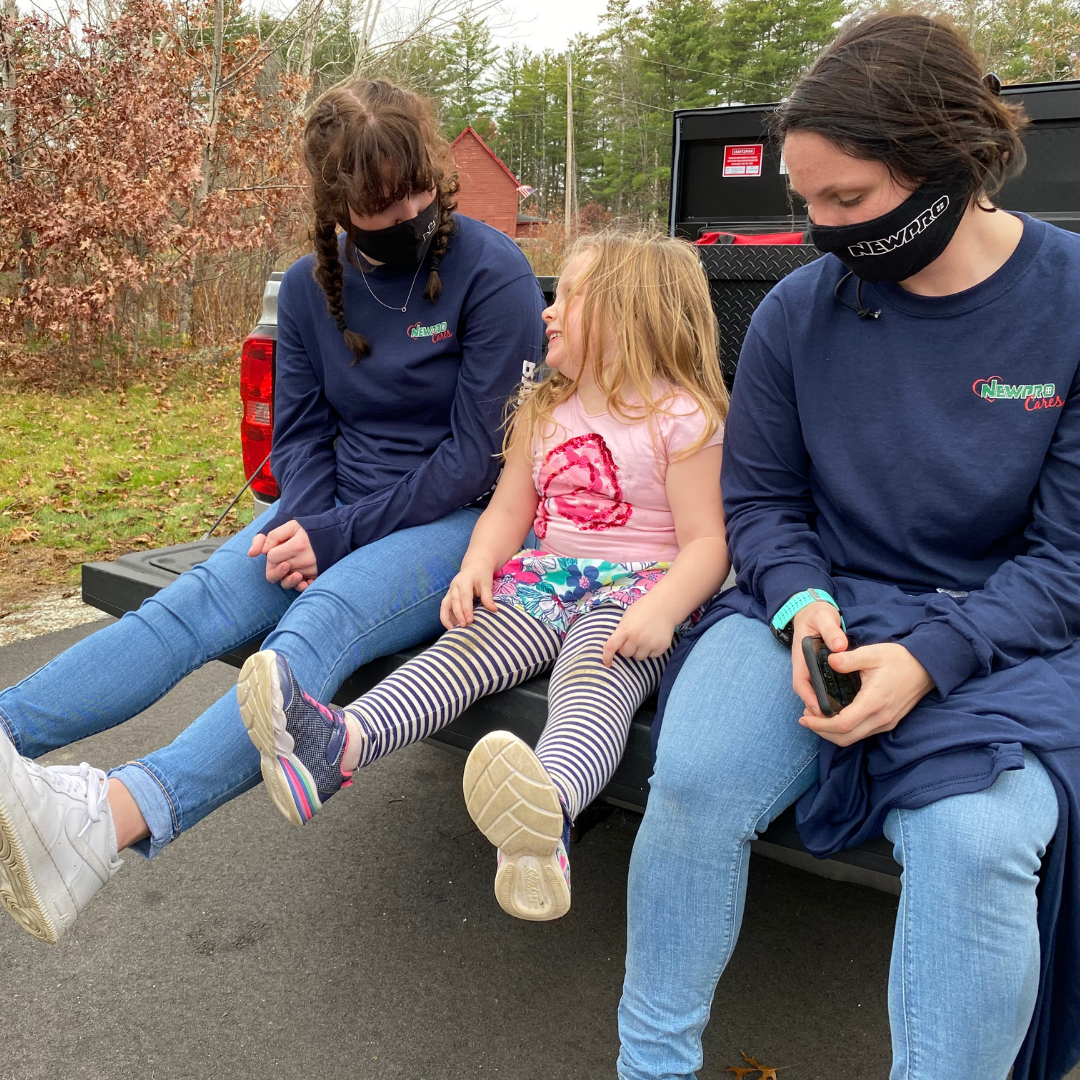 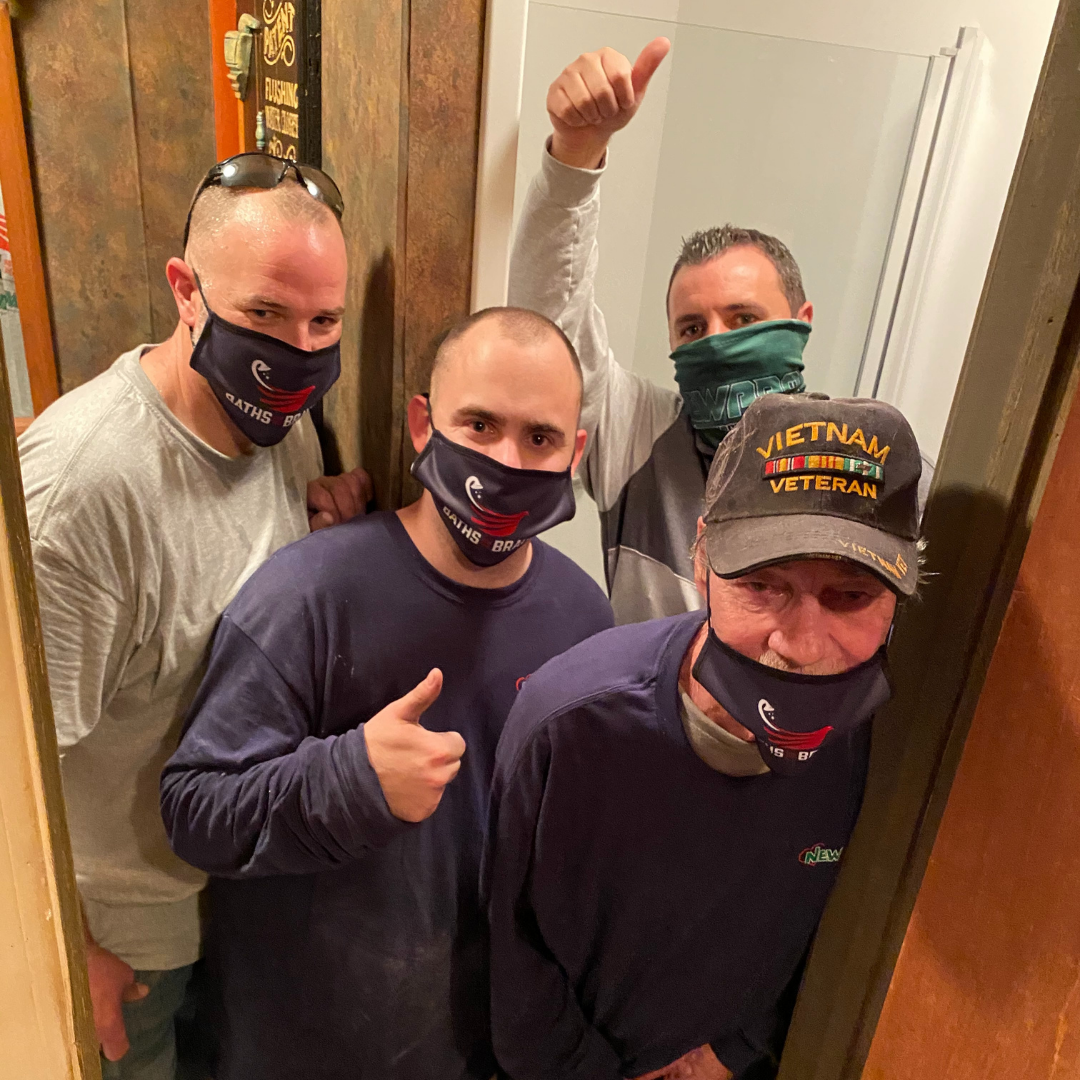 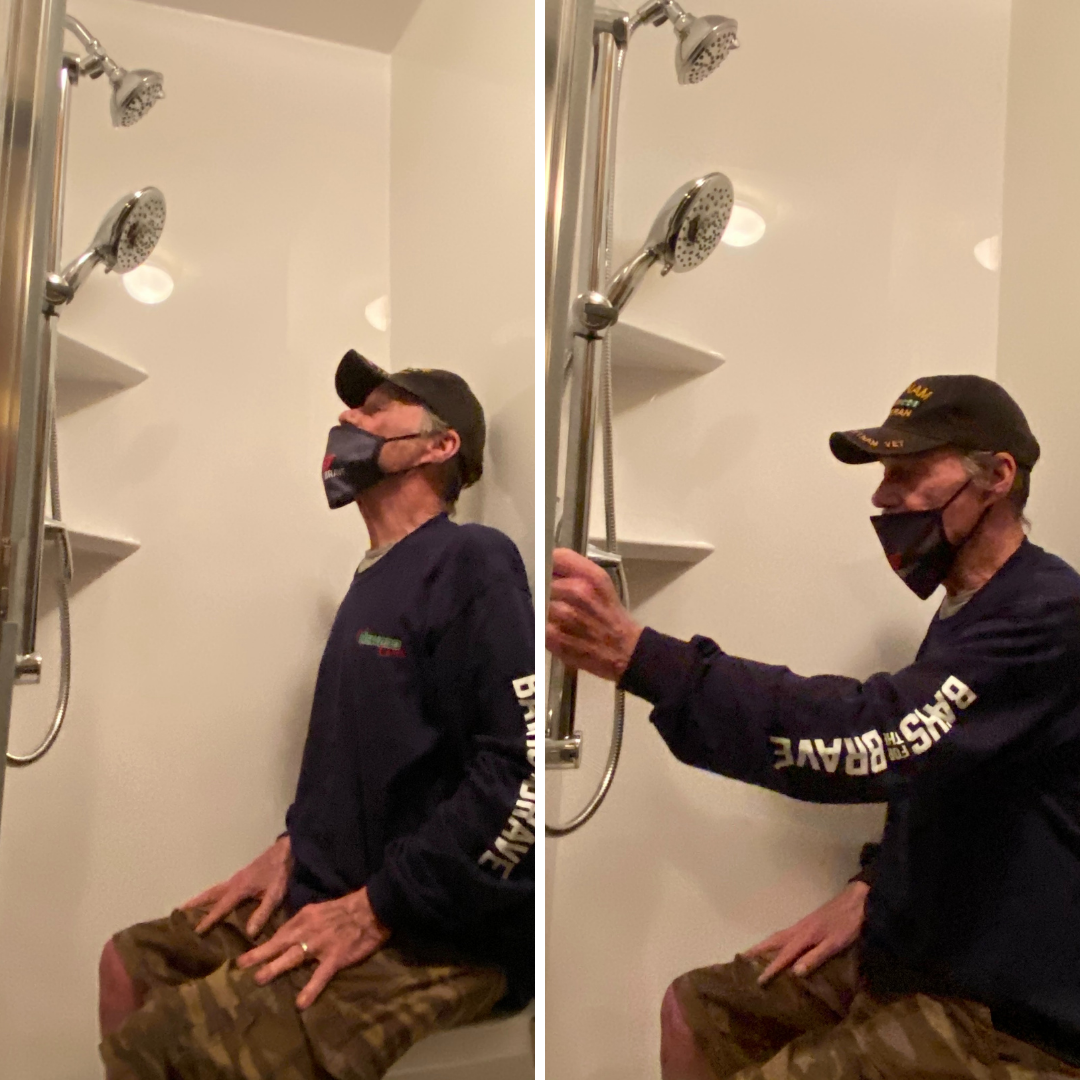 About Baths For The Brave

Baths for the Brave is a partnership between ten home improvement companies from across the United States who have banded together to give back to those who’ve sacrificed so much for us – our veterans. Our goal is to improve the lives of veterans in meaningful ways to say thank you for your service.

In an effort to honor our nation’s veterans, just in time for Veteran’s Day, 9 home improvement companies from across the United States are partnering to provide 16 deserving veterans with the ultimate bath or safety shower remodel. This one-of-a-kind one-day event is called Baths for the Brave and began in Kaukauna, Wisconsin with Tundraland Home Improvements. These remodels will occur simultaneously for these preselected veterans across the country on Wednesday, November 11th 2020. 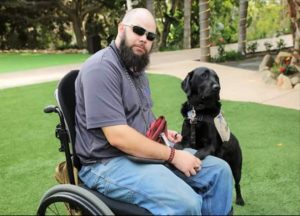 The goal of Baths for the Brave is to improve the lives of veterans who were left disabled from their military service or have experienced hardships in their life that prevent them from completing normal everyday tasks such as bathing. As veteran Ryan Buglar, from Dracut, Massachusetts, puts it:

“I was just about ready to take a chainsaw to my bath tub to create the opening for me to get in and out of the tub. This will absolutely mean independence and freedom for me!”

Taking action and providing remodeled baths and showers for these veterans is just one small way 10 home improvement companies have decided to honor our nation’s heroes.

*BY SUBMITTING A FORM, I AUTHORIZE NEWPRO OPERATING LLC (NEWPRO) TO CONTACT ME WITH INFORMATION ABOUT ITS PRODUCTS AND SERVICES VIA POSTAL MAIL, EMAIL, PHONE AND/OR TEXT AT THE CONTACT INFORMATION PROVIDED ABOVE, EVEN IF I AM ON THE NATIONAL OR LOCAL DO NOT CALL LIST. NEWPRO MAY USE AUTOMATED TELEPHONE TECHNOLOGY TO INITIATE CALLS TO ITS CUSTOMERS. BY CHECKING THIS BOX AND SUBMITTING THIS FORM, I CONSENT TO RECEIVE CALLS FROM NEWPRO ABOUT ITS PRODUCTS AND SERVICES AT THE PHONE NUMBER PROVIDED ABOVE USING AUTOMATED TELEPHONE TECHNOLOGY. I UNDERSTAND THAT CONSENT IS NOT REQUIRED TO PURCHASE GOODS OR SERVICES FROM NEWPRO.